İztuzu Beach is a 4.5 km long beach near Dalyan, in the Ortaca district of the Province of Muğla in southwestern Turkey. The beach is a narrow spit of land, which forms a natural barrier between the fresh water delta of the Dalyan river and the Mediterranean. It is one of the main breeding grounds for loggerhead sea turtles (Caretta caretta) in the Mediterranean and is therefore often referred to as Turtle Beach. The loggerhead turtle (Caretta caretta) is on the IUCN Red list of endangered animals. For this reason the beach has had a protected status since 1988 and is part of the Köyceğiz-Dalyan Special Environmental Protection Area.

The greatest threat to the survival of the loggerhead sea turtle is on these sandy beaches where its life begins. This has triggered an international conservation effort that began in the 1990s. The effort to protect loggerhead sea turtle eggs and to assure a safe breeding ground for this endangered species has made international headlines. This issue is one of the most critical items on Turkey's environmental agenda.

With an average of some 300 nests per year, İztuzu Beach is one of the prime nesting habitats of the loggerhead turtle in the Mediterranean. To prevent disturbance and disruption of the turtles and their nests, strict regulations have been imposed by the government since 1988: 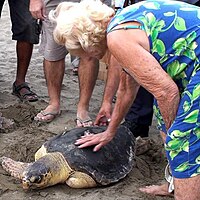 June Haimoff at the release of a rehabilitated loggerhead turtle

These measures have proven to be successful, despite the enormous increase of tourism. The monitoring programme carried out from 1988 onwards, shows a stable population and even a slight increase of nests on the beach.

Ever since May 2009 there has been a turtle centre at the beach, run by the Biology Department of Pamukkale University. During the breeding season students and volunteers are involved in monitoring. They locate and count nests and protect them with cages to prevent predation. Injured turtles found on the beach or in the estuary are brought in for treatment and rehabilitation.
In February 2011 the Kaptan June Sea Turtle Conservation Foundation was established, a foundation whose mission is to protect sea turtles and their habitat. The former beach hut of conservationist June Haimoff has been brought back to İztuzu and has been transformed into a small museum. In May 2011 she was rewarded an MBE by Elizabeth II for her services to environmental conservation and the protection of endangered turtles in Turkey.

In the period from 1988 onwards the Köyceğiz-Dalyan region has become a popular holiday destination. İztuzu Beach is frequented, both by people living or staying in Dalyan and by day tourists from e.g. Marmaris and Sarıgerme.
In 2008 İztuzu Beach was proclaimed winner in the category Best Open Space (Europe) by The Times because of the eco-friendly exploitation of the beach.
In 2011 Dalyan and İztuzu Beach were proclaimed Best Beach Destination of Europe by Dutch holiday assessment website Zoover.